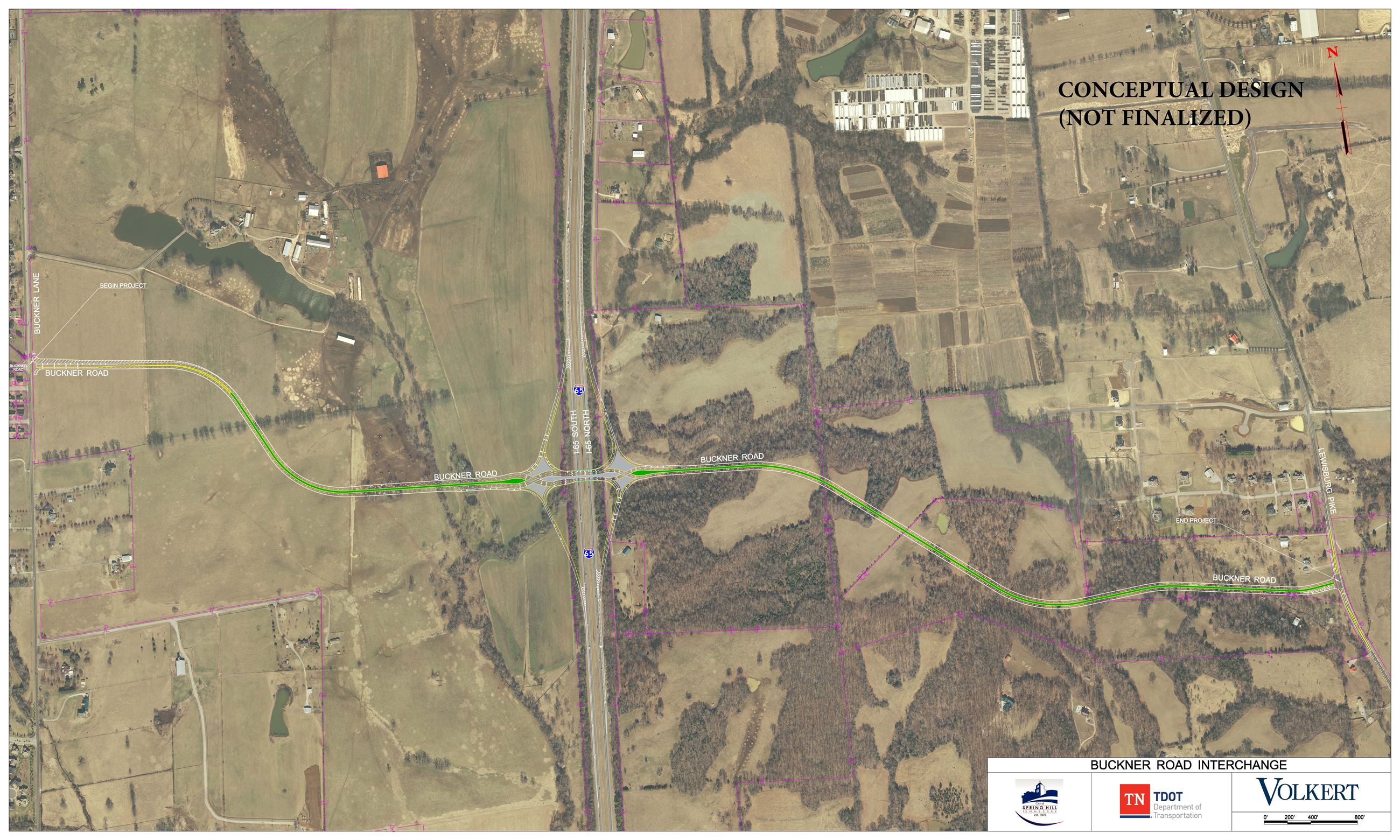 This critically important project will widen Buckner Road from its current two lanes to a minimum of five lanes, and extend Buckner Road east to Interstate 65, where a new I-65 Interchange exit will be constructed with the help of a U.S. Department of Transportation BUILD Grant. Buckner Road also will extend east beyond the interchange to connect Lewisburg Pike (U.S. 431) with the interchange.

The City of Spring Hill held a public meeting Sept. 24, 2019, at Spring Hill City Hall, to present information to the public about the Buckner Road/I-65 Interchange project, and to allow the public to ask questions and provide feedback. An engineering consultant for the City gave a visual presentation at the meeting that explains the scope of the project Opens a New Window. . The meeting was well attended, with 158 people signing the sign-in sheet. The meeting also was live video streamed on our website.

This project will give drivers a needed I-65 exit between Saturn Parkway (S.R. 396) - currently the only I-65 exit in Spring Hill - and I-840 in Thompson's Station. The new Buckner Road Interchange will be a significant design-build undertaking on an accelerated timeline. Fortunately, the project is being aided by a $25 million federal grant Opens a New Window.  awarded in December 2018 to the City of Spring Hill to help fund construction of the interchange.

This project will create much needed interstate access on the north end of town, and help relieve U.S. 31 traffic by allowing Spring Hill's heavily commuter population more direct access to neighborhoods in the central and northern parts of town. This will allow drivers to avoid using the Saturn Parkway exit on the far south end of Spring Hill and traveling back north on U.S. 31 (Main Street) to access these neighborhoods. Both the Interchange and the widening improvements on Buckner Road will be needed to accommodate anticipated growth in north Spring Hill, namely the 2660 Buckner Project slated to be constructed on 775 acres of the property known as "Alexander Farms" along I-65 and Buckner Road. Without the Interchange, the appropriate transportation infrastructure would not be in place to support the office component of this major mixed-use development. When the BOMA gave rezoning approval to the development in May 2017, a Special Assessment District was set up to aid in funding improvements along Buckner Lane and Buckner Road integral to traffic circulation to the interchange. The assessment district requires the developer to partner with the City and share in costs relating to transportation improvements fronting the Alexander Farm property.

The federal grant came about through a tremendous amount of work at many levels from City staff, private sector consultants, elected officials, federal officials and citizens. The funds will make it possible to start much sooner than originally anticipated on the interchange project. The first step is completing the National Environmental Policy Act (NEPA) study and preliminary design work. The Spring Hill Board of Mayor and Aldermen (BOMA) on Feb. 4, 2019, approved a contract to begin the NEPA study, which is expected to be completed in January 2020.

The BUILD Grant comes with a relatively short timeline that requires the project to be substantially complete with construction by May 2024, and achieve final project closeout (of all related paperwork) by September 2025. The current timeline estimates the interchange project will get under construction in 2021. See project timeline Opens a New Window. . The Interchange project, which will be constructed as a Design-Build project by TDOT, is currently listed in the Nashville Area Metropolitan Planning Organization's (MPO) 2040 Regional Transportation Plan. Opens a New Window.

At a City level, the Buckner Road/I-65 Interchange has been ranked one of our city's most important projects, and the BUILD Grant will cover a significant portion of the interchange project cost. The cost of the interchange along with the related roadway extensions is estimated at $48 million. All projects relating to the interchange project - which must be underway during the same 10-Year Capital Improvement Program (CIP) planning period - are estimated to cost more than $80 million when including the planned widening of Buckner Road and Buckner Lane by the City of Spring Hill.

The federal grant is part of the U.S.D.O.T.’s Better Utilizing Investments to Leverage Development (BUILD) program, which awards competitive grants to communities in Tennessee and across the country to fund significant transportation projects, including highways and bridges, public transportation systems, passenger and freight railroads and port infrastructure. In Fiscal Year 2018, the BUILD grant was federally funded at $1.5 billion. The $25 million received by the City of Spring Hill was the largest federal BUILD Grant awarded to any City in Tennessee in 2018, being the maximum amount awarded to any City in the nation. Only 11 other cities in the U.S. received the maximum grant amount.

“It’s not a secret, traffic congestion in and around the Nashville area is a headache –right now, if you take I-65 from Spring Hill to Nashville, you’re probably late to work because you’re sitting in at least an hour of traffic,” Sen. Alexander stated in the federal news release about the BUILD Grant award. “This $25 million federal grant will create a new avenue for Middle Tennesseans to get to work more quickly. This was a highly competitive grant and Spring Hill will receive $25 million, which is the most any applicant can receive. This award is a great compliment to our state and its leadership.”