Important Messages No brush or grass clipping pick up this week Read On... Street Sweeping May 17-28 Read On... 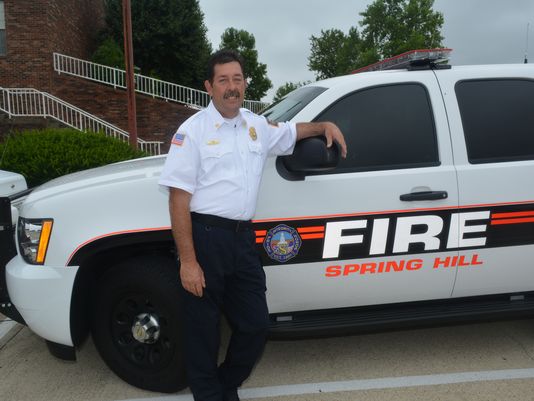 Chief Terry Hood would say Confucius' longstanding advice, 'Choose a job you love and you'll never have to work a day in your life,' had someone like him in mind.

"I guess I never worked a day in my life," Hood said.

Hood is Spring Hill's new fire chief, and he can't say enough about how thrilled he is to be back in a fire hall.

Firefighting is a family tradition for Hood, who has been doing it for 30 years. He started with the Williamson County Rescue Squad in High School, moved up the ranks, and left as chief in 1992. Franklin Fire Department also hired him full-time after graduating and he served 25 years as a city firefighter, retiring six years ago as a lieutenant.

By 2008, he was heading up fire investigations for insurance companies as CEO of a private company, Southern Fire Analysis Inc., before taking Spring Hill's top fire post at age 48.

He and his brothers, Tim and Chuck, grew up watching their dad rush out to fires as a County Rescue Squad and Franklin firefighter.

Today, Chuck is a 30-year firefighter, now a lieutenant, with Brentwood Fire Department. Tim is a paid firefighter for the county rescue squad, where he has worked 28 years.

"Firefighting has always been in my blood," Hood said. "We used to ride with my dad to calls, me and my brothers, and we got to roll hose. We thought that was the biggest thing in the world. We look back now and that was just free labor. But the older we got, 13 or 14, we got to help out with grass fires."

For their 17th birthday, he and his twin brother, Tim, asked for firefighter turnout gear for Christmas. Their names were on back of their fire coats so people could tell them apart.

"My friends were running around on Friday and Saturday nights while I was working, but I got a check and it turned out great for me," he said.

Finding someone like that to oversee Spring Hill Fire Department was the reason City Administrator Victor Lay has said the city took nine months in its search and hiring process for a new chief.

The job became vacant Sept. 30, 2013, when former chief Jim Swindle retired after 40 years of fighting fires. He came out of retirement in 2006 for the Spring Hill post.

Hood, who lives in Franklin, was not initially looking at Spring Hill. But when the job came open, his passion to be back in a firehouse overcame him.

"Every firefighter who starts out thinks 'boy, I would like to be fire chief one day,' " Hood said. "I was making good money on the private side, but if you can do what you love at the end of the day that's what's important. I love helping people. Whether I realized it, it was instilled in me growing up."

Hood personally goes on fire calls and shows commitment to the department by attending off-duty community events. His pet peeve is a dirty fire truck, and he wants to order tire dressing – one more way to show the public "that we're proud of what we're doing."

Hood also requires new hires to pass a physical agility test, including himself, which "shows them just because I wear the white shirt I can still do the job."

Hood's initial impression of the department is that it's a smartly trained department with well-maintained equipment and a strong Insurance Service Office (ISO) rating of 3. He will suggest to city officials, however, replacing equipment on a regular rotation schedule and replacing some fire trucks within the next few years. So far, Hood has implemented small changes, including which vehicles respond to fires.

Hood entered the job as a new Fire Station 2 is being built at Port Royal Park and a new fire rescue truck was purchased last year.

But there was one thing he noticed missing from the department – visibility.

"In every fire station there is always a wall of photos of every fire chief there has ever been, and a wall of pictures of the firefighters in action over the years," Hood said. "And we don't have that in Spring Hill."

He appointed firefighter Jeff Sharp as the department's media representative tasking him with capturing photos on fire calls to not only fill the walls, but to try to get out images to local media.

"Because if they can see what we're doing," Hood said, "we can break down walls and barriers with the community."